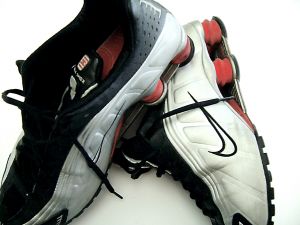 It has been a while since I have given a gluten free update, so I wanted to post one today. The update could simply be stated in three words.

Those that have known me for years know what a huge accomplishment this is for me.

Running is something that I have always wanted to do and never could because of my severe asthma. I have tried, but I have never in my life ran more than 1/2 a mile and even then I would have to use my inhaler multiple times.

As a child I had trouble running across the playground without wheezing and having an attack. In junior high I tried to play sports, I wanted to play sports, but I was never any good because I simply could not keep up.

The fact that I could not run had nothing to do with my athletic ability. I have never been overweight and have been in decent shape most of my life. I simply could not run because of my asthma.

I have been on various medicines over the years trying to control my asthma. I accepted the fact long ago that for me having my asthma under control meant I could do anything, but running or aerobic exercise. I was fine with that because in general I could lead a normal life.

Late last spring though I started to feel different. My lungs and breathing felt different. I felt a strength that I had never felt before. It is hard to explain, but I could tell something was changing.

One day a few months ago I told my husband I wanted to try running. After looking at me a bit strange for a moment, he said sure if you think you can let’s give it a try.

The first few times I tried running I struggled with fear. Afraid to push myself, afraid that I would have an attack that I could not come out of. I would not run alone because I could not get past the fear of what might happen.

For me a big block was to get past the first 1/2 mile because I had never gone past that, but the day I ran a full mile I collapsed on the ground crying. My dream of running died long ago, but now that dream is coming true.

Why my asthma is now under control I do not know exactly. My guess is that my severe reflux is now gone, and I am not refluxing into my lungs like I spent so many years doing. I also know that my overall health is so much better. My body is healing and I think my immune system is thanking me for it.

Disclaimer: I am not a doctor. This is my story. It will not be every one’s story. My asthma did not go away and never will. My asthma is under control. I still take Singulair daily and I carry my inhaler everywhere I go. My asthma will never go totally away and I am aware of that, I am simply sharing the story that after 35 plus years, my asthma is finally under control in a way it has never been.