Main Section » My Day » My Day

Before you read this post please remember that we raise hogs. 🙂 And please don’t think I am too strange.

Saturdays for us are usually spent catching up on things around the house. Sometimes we have other plans, but most Saturdays you will find us working around the house and property. This week we were doing just that. My husband did some outside things that needed done, and I caught up on some things inside.

I cleaned the bathrooms, vacuumed, corrected school work, made cookies, and rendered pig lard. Yes, you read that right, between all of that I rendered pig lard. Why? I am still wondering that myself. But I think the end results turned out pretty good. What do you think? 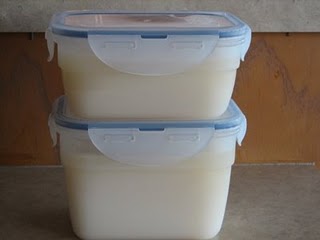 We have raised hogs for four years. Each year I have gotten the lard and planned to rendered it down so that I could use it in cooking. Each year I put it off, and then when I would clean out the freezer I would throw it away. I always felt a little guilty doing this, but I never wanted to mess with cooking it down. This year however, I was determined to deal with it. Our current hogs will be butchered in nine days, so that means I will be getting more meat and more lard. So, I could not put it off any longer. Today was the day. I was determined to do it.

I won’t go into the details about how you render lard. Maybe in the future, but not today. I did discover though, that it was not as hard or time consuming as I thought. I should have taken the time to render it before now.

I am really not sure how much I will use this lard. I know my grandmother and several people I know from her generation said that the best way to make pie crusts and biscuits is to use lard. I guess I will find out, since I now have some.

I am trying to decide if rendering lard fits into healthy eating. 🙂 I mean it has to be healthier than a can of vegetable shortening, doesn’t it?