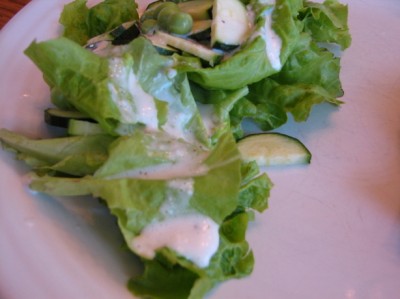 My sister was recently telling me about a salad dressing recipe that she had made and really enjoyed. She had found it in the food network magazine. She also told me that she really likes that magazine. I think it is becoming one of her favorite cooking magazines. She gave me several other recipes that she has made from the magazine that I look forward to making soon.

Since my sister liked this salad dressing so much I decided  to give the recipe a try. We really liked this. It was good. Not exactly like Olive Garden, but good. I did not have Miracle Whip. I do not like Miracle Whip, I like good old Hellman’s/Best Foods mayonnaise, and so does everyone else in my house. Did you know that Hellman’s Mayonnaise is known as Best Food’s west of the Rockies? Yep, it says it right on the side of the jar. When I moved to Oklahoma I was quite disappointed that they did not have Best Foods Mayonnaise because it was my favorite. Then I realized that they were the same and I was quite happy. Seriously, mayonnaise is one of the foods I will only buy a certain brand on. I am a mayonnaise snob I guess.

Now, back to my salad dressing, I did not want to buy a jar of Miracle Whip just to make this, so I used mayonnaise. It was very good with mayonnaise, but a little tangy. I think Miracle Whip may be a little sweeter, and give it a more authentic Olive Garden taste. However, since my family liked it fine with the mayonnaise, I will keep making it that way.

This is also best several hours after you make it. I served it right away the first time we tried it and it was a little thin. By the next day it was thicker and the flavors were blended together better. So, make this one up ahead of time and refrigerate it until ready to use.

Making your own salad dressing is very easy to do. It is cheaper to make it and I think much healthier because it does not contain all the extra ingredients the the store version contains.

Combine all ingredients in a blender or food processor; puree until smooth. Refrigerate for several hours and serve.