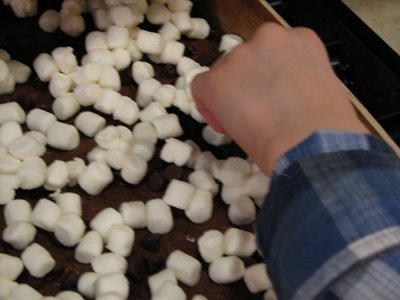 Today I want to talk about having fun in the kitchen while cooking with kids. This is something I have been trying to get better at. I am trying hard to relax a little and let the kids be kids, even when it comes to cooking.
Last week I decided to make some brownies. My six-year old son wanted to help. My daughters usually beat him to the kitchen to help me, but both my daughters were busy doing other things. So, I decided it would be a good time to have just him help me.

As we were putting the brownies together my son decided he thought we should put marshmallows on top. He thought this was a brilliant plan and nothing I said, or other things I suggested, would change his mind.

To be honest, this particular day I really wanted/needed some chocolate. That is why I wanted to make brownies, after all. But my idea of a nice brownie is not one that has marshmallows on top. Since I could not convince him that they would be better left alone or maybe with chocolate chips sprinkled on top, I gave in to the marshmallows.

I baked them like I normally would and when they were done I let him sprinkle marshmallows on top. I put them back in the oven for a couple of minutes to melt a little and then let the cool.
That night when we had dessert he was so proud of the brownies that he made. He told everyone that it was his idea to put marshmallows on top. He probably would have eaten the whole pan if I had let him. He was that happy with them. It was then that I realized it had been worth it to let him be creative in the kitchen.

No these were not the best brownies that I ever made or helped make. They were extremely messy, gooey and hard to eat. But my son loved them. And even those these were not my favorite brownies to eat, the memory that my son and I will have of making these brownies will last forever.

So lets work on letting our kids be creative in the kitchen. You may not create the best dishes, but you will create some great memories. It sure works for me.