Several months ago I asked what you like, dislike, or would like to see more of on this site. Several of you asked for more crock pot/slow cooking recipes. I had planned on doing more of those type of recipes, but I have not tried many new crockpot recipes lately. I have been using my crockpot, but I have been cooking the same recipes that I already have posted. The few new ones that I tried were not worth sharing. So, I did not have anything new slow cooking recipes to post.

But today I do. I made a really good fajita meat in the crockpot. It was very easy and very good. I found this in a cookbook from the library. I did not write down what cookbook it came from or I would give credit to it.

This recipe caught my attention because of how easy it was. I know this is not authentic fajita meat. This is more of a quick/lazy version. But my family really liked it and I will be making it again.

You can change the toppings on this to make it more to your taste. I like the green peppers and onions cooked on the stovetop and added when I serve it. We also like cheese and sour cream on ours. My kids like to eat theirs with beans. So, be creative and serve it with the toppings that your family likes. 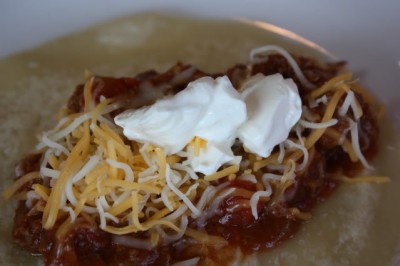 Combine first five ingredients in crockpot. Cook on low for 6-8 hours. If this starts to get dry add water. I ended up adding about 1/4 cup to mine. Just before I serve this I fry up the sliced peppers and onions and then add to the meat as I serve it. Serve on tortillas. We also added shredded cheese and sour cream to this.