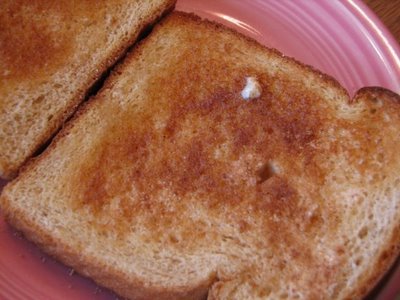 I recently served my kids a dish for breakfast that they thought was wonderful. It was one of those times where they thought I was brilliant for thinking of such a wonderful breakfast. They really did go on and on about how they loved it and wanted it again, soon and often. Any guesses what I served them?
Cinnamon and sugar toast. Brilliant aren’t I? I can’t believe I was so smart to think of it. 🙂

What surprised me about all of this is how wonderful my kids thought this was. My kids have good home cooked meals all the time. I regularly make cookies and desserts for them to enjoy. And they are thrilled with cinnamon toast.

Now I feel bad that I have never served this to them. I haven’t served it because it is one of those things I ate a ton of growing up. It was a frugal and easy thing to eat for breakfast. If there was not jam or honey we put cinnamon and sugar on our toast. So for me it is not a treat.

But now I will serve my kids cinnamon toast more often. In fact they have been eating it at least once a week.