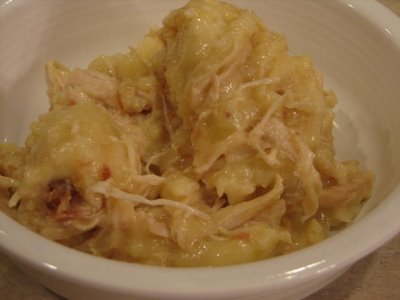 We like chicken and dumplings in our house but they are usually time consuming to make. I have made Martha Stewart’s Chicken and Dumpling recipe several times. Although it is very good, it also takes quite a while. You cook a whole chicken, use homemade chicken stock, and on and on. I usually do not have hours to spend on chicken and dumplings. I know this is the best way but honestly it is too time consuming.
I was looking for a quicker version of chicken and dumplings a few years ago and I came across a recipe on Allrecipes for crockpot chicken and dumplings. I thought the ideas sounded great. It did call for canned biscuits which I rarely, I mean basically never buy, but I decided to give it a try. We really liked these. My whole family enjoyed them. I liked them because they were quick and easy plus they were pretty inexpensive to make.

Since I am now avoided packaged and processed food I have adapted it using home made biscuit dough. It worked well and I will now be making them that way instead. I used the biscuit recipe off the bag off self rising flour. I used two cups of flour in the recipe and it seemed to be the right amount. I am posting the canned biscuit version but I encourage you to also try it with homemade biscuit dough. They are a little thicker with the homemade dough but still very good.

DIRECTIONS
Place the chicken, butter, soup, and onion in a slow cooker, and fill with enough water to cover.
Cover, and cook for 5 to 6 hours on High. About 1 hour before serving, place the torn biscuit dough in the slow cooker. Cook until the dough is no longer raw in the center.

I know this is not really a soup but it is close 🙂 so I am linking it to Overwhelmed With Joy’s soup exchange.