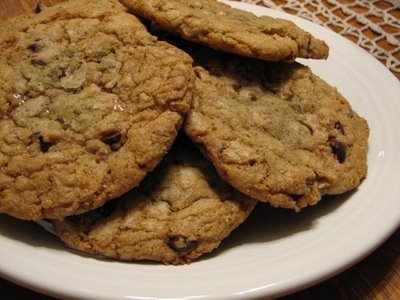 My two main hobbies right now are cooking and blogging. Cooking is time consuming when you do as much of it as I do. I cook more than necessary. I love to bake and I bake way more then we eat. I end up giving a lot of my baked goods away. I love it, but it does take a lot of time. It can also be an expensive hobby when you love all kinds of cookbooks and kitchen gadgets like I do.

Last fall I posted a recipe for a Chocolate Toffee Pecan cookie. I took a chocolate chip cookie recipe that I love and adapted it with toffee and pecans. It was through blogging about this recipe that I found out about a recipe contest that Bass Pecan was having. I entered the contest and sometime in October I was chosen as their recipe of the week. I had never entered a recipe contest before, so I was thrilled to be chosen for the recipe of the week.

I still can’t believe it. My hobbies are paying off. I have never won anything like this before and I am so excited. Can you tell?

Do you like the picture above? They asked me to send them a picture of some that I had made and I am trying to decided if I like this one. Do you like it? My family hopes that I need to keep taking pictures to get the right one. They want me to keep baking cookies. But I think the one above is pretty good. Let me know what you think.

And if you have not tried these cookies, you really should they are so good.