If you have read my blog long you know that I love Martha Stewart’s recipes and cookbooks. My husband’s office gets Martha Stewart’s magazine for the waiting room. I get the privilege of looking through it before we set it out and once in a while an issue is so good it never makes it to the office.

That is what happened with the July 2009 issue. It had some great recipes in it. My favorite recipe was for a pound cake. Not only was it a pound cake, but it had ten different variations. All of which looked good. The main recipe is just a basic and classic recipe for pound cake. I calls for a pound of butter, etc.

I recently had quite a few blueberries, so the blueberry version of the pound cake caught my attention. When I was talking to my sister, she told me she tried the blueberry version and it was very good. So I knew I should give it a try. It uses the basic recipe, but uses some sour cream in place of some of the butter and it has blueberries folded in.

This makes two loaves. We ate one and I froze the other. This is not a healthy dessert, but it is really good. And I will be sure to post about the different versions of this cake that I try. 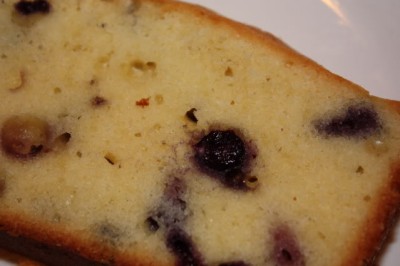 If you have some extra blueberries or just love blueberries, you should give this a try.

Previous Post: « Simple and Healthy Summer Supper
Next Post: How Do You Grocery Shop? What Works For You? »