Well, I knew I was taking a risk by eating regular oatmeal. I knew it was just a matter of time before I reacted to it, but I was trying to avoid the cost of gluten free oatmeal. I was willing to risk it, hoping that I would be able to eat them.

Being gluten free, and now nut and peanut free, has made eating cereal and granola bars about impossible. I realized that the only truly safe and cost effective way to eat these items was to make them myself at home. So, I was making granola and granola bars almost weekly.

This had been working great. We love homemade granola and granola bars. We had been eating them often, that was until I reacted to the regular oatmeal.

I could tell I was getting gluten somewhere, so I made note of what I was eating. The only thing I could track it to was the oatmeal. I stopped eating the regular oatmeal, and I felt much better.

But yikes, the price of gluten free oats is so high. I have also had a hard time finding them in my area. The ones I did find were five dollars or more a pound. I was struggling with paying that, so I looked into ordering them online.

I realized that even with shipping, I would save money ordering in bulk straight from Bob’s Red Mill. Not only that, Bob’s Red Mill recently started making gluten free quick oats. So, I ordered myself some oats.

I received them yesterday and I could not be happier. I love Bob’s Red Mill. They are great.

But, now I have lots and lots of oatmeal to eat. 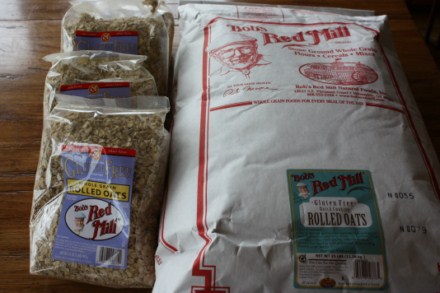 I wonder how long it will take us to eat all those oats?

I wish they would have offered the regular gluten free oats in the 25 lb bag. I actually would have bought a 25 lb bag of them instead of the smaller packages, but it was still cheaper than I was paying at the health food store.

Now, depending on where you live it may not be cheaper because of shipping, but it is worth checking into.

My family lives less than one hour from Bob’s Red Mill, so next time I visit Oregon, I will be bringing oatmeal back in my suitcase I guess. 🙂

Where is the cheapest place that you have found gluten free oatmeal?