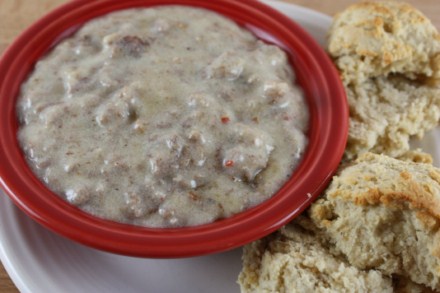 My family loves biscuits and gravy. They have missed them since I went gluten free.

Honestly, I can do without them. I will eat them, and I made them because my family loves them, but they are certainly not on my top list of things I miss.

However, since my family has told me several times in the last few months how much they missed biscuits and gravy, I decided to tackle a gluten free version.

I had not tried to tackle a gluten free version because I have had trouble coming up with a gluten free white sauce or gravy that I was happy with. I know many people just use cornstarch in place of the flour. I had tried that and was not happy with the results. I love cornstarch for things like pudding, but for sauces and gravies I have not been happy with cornstarch.

The main reason is that many times I end up needing to reheat items like gravy or white sauce. I find that cornstarch based sauces do not reheat well. The texture just does not come back together right. So, I got discouraged and kind of gave up for a while on finding one.

However, I recently purchased several gluten free books by Annalise Roberts. In one of her books she mentions using potato starch in white sauces. I immediately knew this was worthy trying.

My family was so excited that this worked. The gravy turned out well. Even the leftover gravy reheated the next day.

Now, if I can just figure out how to get a light and fluffy gluten free biscuit to go with the gravy. 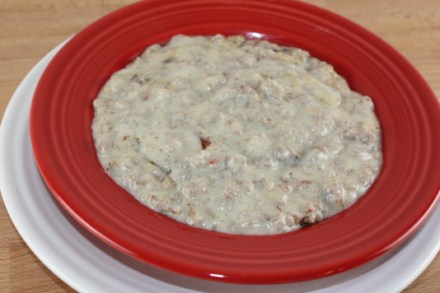