Last week I walked into a liquor store to buy vanilla making supplies, and I think the store clerk thought I was crazy.

You see I am a bit clueless in a liquor store. The only time I really venture into one is to buy Vodka to make vanilla. This time though I wanted to try a few other liquors to make my vanilla, so I was not sure exactly what I needed.

I have been doing a little research, and also talked to my dad, who is also now making his own vanilla, and I decided that I wanted to try making homemade vanilla using bourbon and rum this time also.

So, I made a trip to a liquor store when I was out running errands last week. The clerk at the store asked me if I needed help and I said yes and need some vodka, rum, and whiskey.

And then for some reason I felt the need to explain what I would be doing with all this alcohol.

Really I probably should not have even bothered explaining. The guy works in a liquor store after all, he is used to people buying liquor, but I don’t think he is used to someone telling him that they are making homemade vanilla with the liquor they are buying. 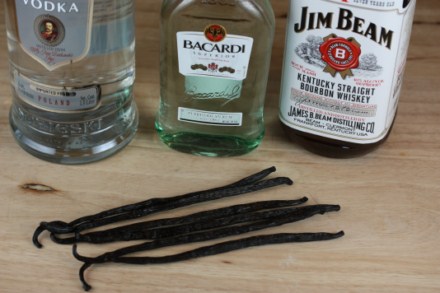 When I tried to explain that I was using it to make homemade vanilla, and then went on to explain the process, I just got this really odd blank look. I am guessing the store clerk thought I was crazy. I mean, who makes their own vanilla, probably only crazy foodie type people.

But even if you are not a crazy foodie type person, I highly recommend making your own vanilla, which is what I was trying to explain to him.

It is so easy and so much better than the store bought vanilla. Now that I have made my own I will never go back.

I even did a video two years ago on how easy homemade vanilla is to make. I also did a whole post about the first time I made it, which was back in my early days of blogging, explaining how to make it. It really is easy.

And every time I talk about making my own vanilla I get asked about buying vanilla beans. My number one tip is don’t buy them at your local grocery store, they are way too expensive. I have purchased them several times now from JR Mushrooms and Specialties through Amazon

and I have been very happy.

Since this is my first time using rum and whiskey to make my vanilla, I will be sure to post an update in a few months when it is ready and I give it a try. I am interested to see how different it is from the vanilla I have been making with vodka.

And if you are trying homemade vanilla for the first time I suggest starting with the vodka and then branch out to other alcohols after you make it a time or two.

Have any of you made homemade vanilla before? I would love to hear your thoughts on it.