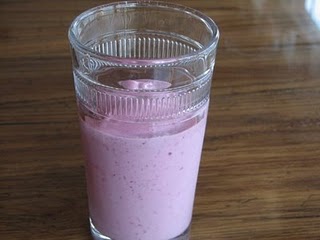 The other day I found a really good deal on raspberries, at least a good deal for my area. They were marked way down because they were not at their peak and were not looking so good. I grabbed several containers knowing that I could freeze some if I did not use them all.

I did freeze most of them but I saved some out for us to eat. I decided to fix raspberry milkshakes for dessert. My kids loved them. Last week also we enjoy peach milkshakes.

I have mentioned several times recently to friends that we like fruit milkshakes, peach, raspberry, strawberry, and any kind of berry. When I have said this people look at me strange and say something like “peach milkshake, I never thought of that”. We grew up eating fruit milkshakes but my husband had never had them. I think we probably made them because we had so many berries and peaches that we got creative on how to use them. But I know it was not just our family who ate them. In the northwest the restaurant Burgerville serves the best, I mean the best, raspberry and other seasonal fruit milkshakes, but here in Oklahoma people seem to think they are strange.

So, are fruit milkshakes a regional thing? Am I the only one who grew up eating them?