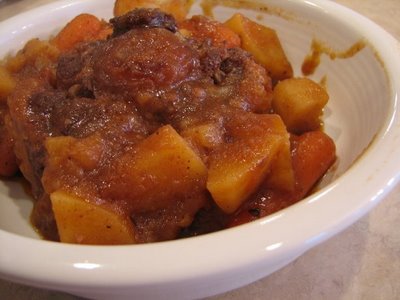 Thank you for all your comments on the post I did a few weeks ago about cooking oxtail. Several of you suggested Paula Deens recipe. So, I decided to try her recipe for oxtail last week. The only thing I did different was to add more liquid so that it would be more stew like. I am glad that I added more liquid. I think it made it better.

I seriously considered letting my husband write this post, because I think he would do a better job than me talking about how good this recipe was. But he is busy with other things, so I will try to do my best.

I had difficulty with this one from the beginning. Not the recipe, but the whole idea of eating a tail. I am not really sure why, but I did. I grew up eating beef and we ate things like tongue, heart, and liver. We did not let those things go to waste. Now, I am not saying I enjoyed eating tongue, heart, and liver, but I have eaten it quite a bit. So, I should have been able to make and eat this fine.

But cooking oxtail was just hard for me and it did not help that when I opened the package it looked like this. 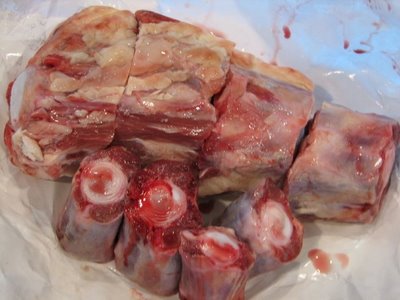 It looked like a tail, a real tail, minus the skin, hair, hide part. I almost gave up right there. But I was trying really hard not to be wasteful. I wanted to make use of this.

So, I proceeded on with the recipe. While it was cooking it actually smelled pretty good, but again, I kept thinking, it is tail. My husband told me I should be more positive or the kids were never going to like it. So, I tried, really I did.

My son agreed with me, he took one bite of the meat and that was enough for him. My 11 year old daughter thought it was okay. But my 9 year old daughter and my husband loved this. They thought it was wonderful. They want me to cook it again and wondered why I had never cooked it before. My husband said it was one of the best stew he had eaten. He really did love it. He said the meat was the best part.

So, I guess I will make this again next time we have an oxtail from our beef. I will just be sure to put lots of vegetables in it for my son and I to eat.

I also think that since the oxtail had such great flavor, that it would make great beef stock. I could definitely see myself using it for that. I am sure it would be a lot better than anything I could buy for stock. This is something I will cook again because it comes with our 1/2 of beef that we buy each year. However, it is not something I would spend a lot of money on at the grocery store. But that is just me, my husband would disagree.

« What Mothers Day Means To Me
Making Pie Crust »