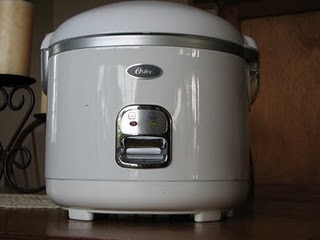 A friend of mine recently borrowed my rice cooker to see if she liked it enough to purchase one. I was telling her all about why I like mine, so I decided to post about my rice cooker for Tooling It Up Tuesday.

I received my first rice cooker as a wedding gift. At the time it seemed like a pretty gourmet tool. I had no idea though how much I would use and enjoy this gift.

When I was growing up we did not eat much rice. Yes, it was a cheap food but my dad did not really like it. So, I had not really cooked much of it. When my husband and I first got married and he was in college we ate a lot of rice because it was cheap. I liked how the rice cooker made it seem to so easy. Now, I know cooking rice is not the difficult, but I still liked how simple the rice cooker made it.

My rice cooker also has a stay warm feature. I like that feature because if the rice finishes cooking before I am done fixing the rest of the meal, that is fine. The rice will stay warm for about an hour.

The rice cooker I received for a wedding gift broke a few years ago. I replaced it with the one pictured above. When my first one went out I knew I needed to replace it with a new one. I knew it was definitely a tool that I would keep using a lot.

Do you have a rice cooker?