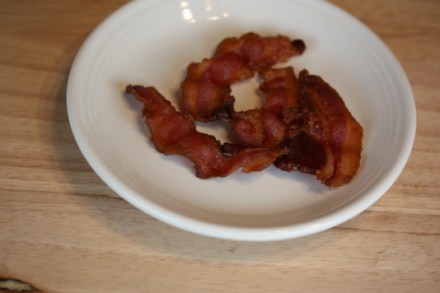 Most of you knew that last week’s What Is It Wednesday was some sort of pork. Many of you guesses backfat, some of you guessed pork belly, and a few said salt pork, but those of you that guessed jowls were right. They were hog jowls.

Jowls are the cheek/jaw area of the hog. They are cured and cut similar to bacon and in some areas they are known as jowl bacon, but they are not bacon.

My whole family loves jowls, except me.

My son and husband like them better than bacon. My son thinks that a hog should have more, or larger jowls, just so that we have more of them to eat. Since we raise hogs, we only get so many jowls a year and according to my son it is not enough.

But here is where I will admit that I do not like jowls. I dislike them so much that I do not even like to cook them. They may look a lot like bacon, but that is where their similarities end as far as I am concerned. They are fatty and gristly, so the texture is odd. And although cured and smoked like bacon, they do not taste like bacon.

Yes, I know many people consider them a treat, especially in the south, but for me they are just odd both in texture and taste.

It has not mattered how I cooked or ate them, I have not liked them. My in-laws first served me jowls about 15 years ago and I do not like them any better today than I did then. Once again this Northwestern raised girl, has not adapted to a Southern loved food.

My thought is that some parts of the hog just should not be eaten. Or at least grind it into sausage so I can’t tell what I am eating. 🙂

But now that so many of you talked about backfat and pork belly in the comments last week, I might have to try them sometime, maybe I would like them better than jowls……..

What are your thoughts on jowls? And you are free to disagree with me and express your love of jowls. 🙂