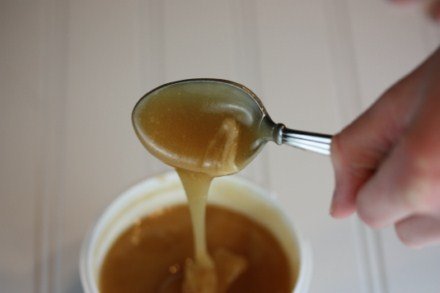 Wow, I could not believe that several of you knew exactly what last week’s What Is It Wednesday item was. And for those of you that did not know, it was whipped honey.

Whipped honey is also known as spun honey or creamed honey and it is really good!

And really good whipped honey spread on bread is so good!

Now, whipped honey is one of those things that many people do not realize what it is. Whipped honey is not honey that has been whipped by mixing it or adding air. Whipped honey is actually made in a very controlled environment with a bit of a scientific process. Whipping honey in a mixer for a long time, will get you a similar texture, but it is not the same thing.

For those of you that have had whipped or spun honey before, what are your thoughts?