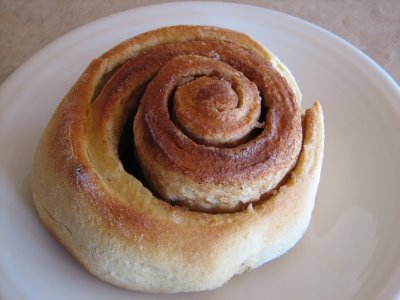 I have tried several different recipes and ideas over the last few months. Some were good, but not really good. I want a really good whole wheat cinnamon roll. I want one that my family will like and enjoy. I want it to not seem healthy.

This cinnamon roll recipe is one I can feed my family without feeling guilty.

So here is what I did. I made my overnight whole wheat dough and refrigerated it overnight. The next day I rolled it out. I think the trick to great cinnamon rolls is rolling the dough pretty thin. This gives you more layers of butter, sugar, and cinnamon. I then spread about 1/3 cup soften butter across the dough. Then I sprinkled with cinnamon and sugar. But I don’t really measure this part. I think it is about 1/4 cup of sugar and about 3/4 tablespoon of cinnamon. Roll up and slice. Let rise 45 minutes. Bake at 400 degrees for 10 minutes or until done.