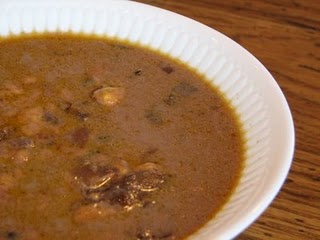 Saturday night for dinner I made the Pioneer Woman’s Black Bean Chowder. It was so good. I think this is the best black bean soup that I have made. It had really good flavor and we all enjoyed it.

It does make a lot though. I think next time I will half it. I knew that it would make a lot because it has 32 ounces of beans in it. I wanted leftovers this time. We will get two dinners and probably a lunch out of it.

I did do a couple of things different. I did not make the yogurt relish. I just did not like the sound of that on the soup. I also left out the liquid smoke. I used a ham hock from our hog meat and I did not think it needed any more smoked flavor. The other thing that I did was make it in the crockpot. It cooked total for about nine hours. I did not add the milk until about half way through. I think I could have waited even a little longer to add it. Then about a half an hour before I served it, I added the cheese and flour. I think it worked really well in the crockpot and that is probably how I will make it again. Oh, and I forgot to put the butter in. But I think it tasted just fine without it but it probably would have been even better with it in.

If you like black bean soup you should give this one a try.