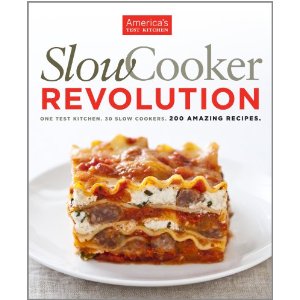 cookbook. Since posting about the cookbook, I have had several readers ask what my thoughts were on it.

I waited so long to give  a full review of the cookbook because I wanted to have a chance to use the cookbook and try a few recipes out of it.

cookbook though is different. It contains more modern recipes and ideas. They also deal with some of the issues that arise when cooking in a crock pot. And they share tips to help over come those issues.

I also like the fact that the recipes are a bit more gourmet. I mean there is nothing wrong with most slow cooker meals, but many of them are pretty basic and plain. America’s Test Kitchen though takes it up a notch, they make slow cooker food more modern and a little fancier.

I will say though that many of these recipes take more work. They are not dump a bunch of cans and a slab of meat in the crock pot type meals. Many of these recipes take a little more time to get started or require a few minutes for finishing them off at the end of cooking, but I do not mind that. That is part of what makes this book unique and different from others.

Does anyone else own this? If so what are your thoughts?