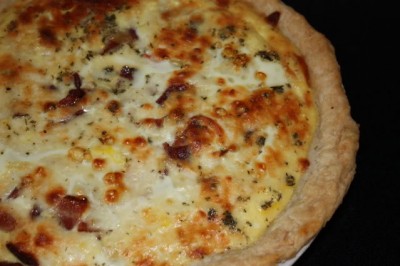 I have been picking a lot of tomatoes from my garden. My husband and all three kids love tomatoes. We slice them and they eat them with salt and pepper. We have been eating them a lot like this. But I have also been making things with them like my bruschetta, my simple summer salad, and salsa.

I am trying to come up with other ways to use them. I have read quite a few recipes for tomato pies. Some containing basic ingredients and some containing some strange things, some are more quiche like and others call for things like mayonnaise. I decided to take what I like about several of them and combine them into one quiche like pie.

What I came up with is a little bit like a quiche and we really like it. It is a healthy and frugal meal that is great for the summertime.

When I made this last week I put bacon in it. It was really good, but if want it to be more frugal just leave the bacon out. We just like the flavor it adds and it is only a few pieces. I also double this. That way we have plenty to eat for lunch the next day. I like to make two meals at one time if possible and it works great for me to do that with this recipe.

When I made it last time I put zucchini in one of the pies. The flavor of this was really good. The zucchini added another depth of flavor to it, and made it even healthier. The one thing I will do different if I add zucchini to it again is that I will cook it first. The zucchini in the pie made it a bit watery. Zucchini contains a lot of water, so I think next time I will sauté it first to release some of that water. I think that would make it even better since the overall taste great, it was just not as firm as I would have liked. 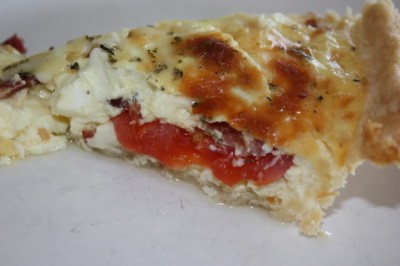 Spread tomatoes in bottom of unbaked pie shell. Sprinkle bacon on top of tomatoes and then cheese on top of bacon. In a separate bowl mix milk, eggs, salt, and seasoning together. Pour over tomatoes, bacon, and cheese. Bake at 350 for 40-45 minutes or until center is set.

If you are adding zucchini, layer on top of tomatoes.