Soy sauce in general is Asian and in general contains wheat. At least the common Asian soy sauces sold in the US do. The fact that soy sauce contains wheat is the reason that most Asian food, food served in most Chinese restaurants, and things like jerky are not gluten free.

There are soy sauces that are gluten free, but most of them are tamari and not what most people think of as soy sauce. 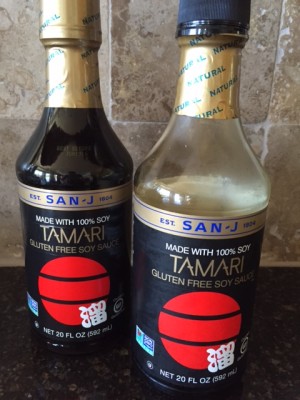 Tamari is a Japenese soy sauce. It tastes different than regular soy sauce. It is thicker, less salty, and I think has a stronger taste.

Many people say that you can substitute tamari in all recipes that call for soy sauce. I disagree with that. Because the taste and texture are different, it can change a recipe. Sometimes it changes it quite a bit.

If a recipe calls for just a few tablespoons of soy sauce, I use tamari. If it calls for a large amount, like in a marinade, I use it with caution, knowing the recipe may taste quite a bit different than intended.

Many times when I have tried to adapt my older recipes to gluten free using tamari, I have found it just doesn’t taste the same and I gave up trying to get it right.

When we first went gluten free I really missed soy sauce. I was not a fan of tamari. I will say though that it has grown on me and now I enjoy it. My husband on the other hand is not a fan. He misses me cooking with regular soy sauce. 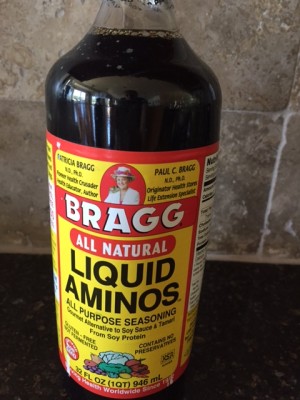 A lot of people also use Bragg Liquid Aminos in place of soy sauce. I have heard over and over again that many gluten free people love it. I am not one of those people. I have some that I keep on hand, and I do use it occasionally, but again it is not the same in taste and texture as soy sauce. At least in my opinion it is not.

The fact that I have had this bottle for over two years and it is still full tells you how much I like and use it. I know many of you love Bragg and disagree with me on this one, but I wanted to share my thoughts on it.

If you have tried it I would love to hear what you think of it in place of soy sauce. 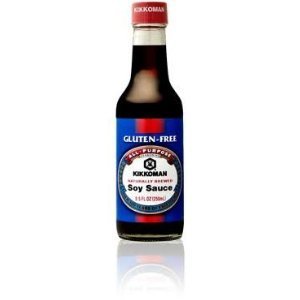 I also recently discovered the Kikoman now has a gluten free soy sauce. From what I can tell though it is a Japanese style tamari sauce and not regular soy sauce. So again I don’t think it can be used exactly the same. I have not seen this in stores though, but Amazon does carry the Kikkoman Gluten Free Soy Sauce. I actually just ordered some of this and will let you know what I think of it.