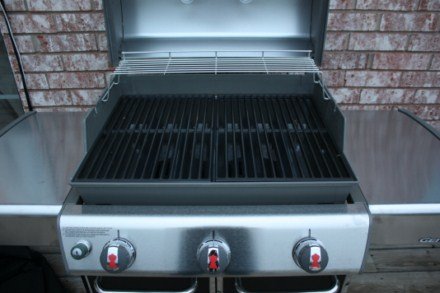 Thank you all for your thoughts and opinions on the different brands and types of grills last week. I really appreciated it and it helped in our search for  new grill.

I posted last week on Facebook that I was having a bit of price shock when looking at grills.

Part of the price shock was due to looking at grills nicer than what got destroyed in the storm, but I had also not been grill shopping in several years and I had no idea that there were so many choices and different features available for grills now.

In the end, although may of the features are nice, we decided that we would not use them.

My last grill had a side burner. When we bought that grill, we thought the side burner would be nice for cooking foods like potatoes, corn, or other things that went along with the meal while we were grilling. But in reality, I never once used that burner. I always thought it was a bit awkward and just ended up cooking things inside on the stove.

I also loved some of the larger really nice grills that could cook a lot of meat, but we are a family of five and although we entertain often during the summer, I did not think I wanted that big of a grill taking up space on the back deck.

So, although the fancy higher priced grills were tempting, we ended up buying a pretty basic, yet very nice grill, and I look forward to using it.

Do you have and use the extra features like side burners or other things on your grill?

I have received a few questions about what grill I bought and how much I paid for it. So, I wanted to update the post to include that information. We bought a Weber Genesis E-310

, we bought it at Home Depot, but it the same price as Amazon sells it for.

I am not affiliated with Weber or Home Depot, and they do not know who I am and did not pay me to mention them.