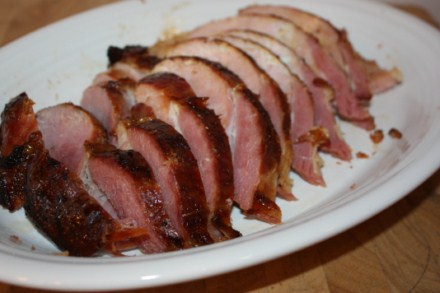 Last year I posted several times about my 18 lb hams. Every time I mentioned them several of you would comment or email about how big an 18 lb ham must be.

The other day I was looking through my food pictures and found a few pictures of one of my 18 lb hams. I thought since Easter was coming up, and many of you will be cooking ham, that it would be a good time to share the pictures of what an 18 lb ham looks like, but I was not sure anyone would care about an 18 lb ham.

So, I asked last night on Facebook if I should post about my hams and many readers responded that yes they were curious and wanted to know. 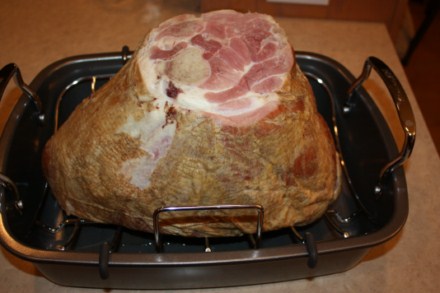 That is a large kitchen aid roaster pan and the ham takes up basically the whole pan.

Our hams are not fully cooked hams. You can not cut a piece of this off and eat it like you would most of the hams that you buy at the store. It is raw and has to be cooked.

Technically they are not fresh hams because they have been smoked and seasoned by the butcher that processes our meat for us. But they are still basically raw and not ready to eat as is.

Sometime, I will post exactly how I cook my hams, but I will say an 18 lb raw ham is hard to cook. Mainly because it is so large that it does not cook very evenly. And raw hams have to cook for quite a few hours as it is, add on the 18 lb thing, and they take forever to cook.

I really prefer smaller hams, but some times our hogs end up being a bit larger and we get really large hams. Last year I actually had four 18 lb hams.

You see each hog has two hams, basically each ham is half of the backside. We always have each half cut into half  and two hams become four. So, my 18 lb ham was really a 36 lb ham and that means I had about 72 lbs of ham from one hog last year.

Yes, that was one large hog. Any guesses why I am tired of ham.

Thankfully the hogs we butchered this year were smaller, so my hams were smaller. I was quite relived when I saw hams that were closer to 12 lbs this year.

And for those of you thinking that an 18 lb ham must be really fatty, ours are not. We are very careful what type of hogs we raise and we are extremely picky on what we feed our hogs. Our meat is usually very lean meat. 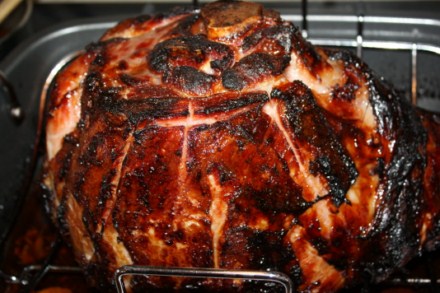 This is what the ham looks like after it is cooked. I will post my favorite glaze for ham next week. It is really good.

The taste and texture of a ham like this is really different than the hams most people are used to, but they are very good.

So, has anyone else cooked an 18 lb ham before?