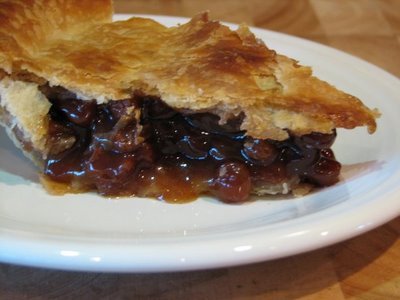 This recipe for raisin pie was one I was unsure of when I made it. When I saw the recipe I thought it would be worth trying, but I was unsure about what my family would think. They actually enjoyed it. I was surprised. In this day and age, we are spoiled by fancy, chocolate filled, sugar filled desserts. In our time raisin pie seems like a strange choice for a pie, but it is really good.

Not only could you make it year round, but raisins are inexpensive. You could buy raisins much cheaper than you could most other fruit used for a pie. They were also readily available. Almost everyone could get raisins.

These days a lot of people would not consider making or eating a raisin pie, but we should. It is an easy and frugal pie. We need to follow the example of our grandmothers and their generation and use what we have. We all probably have raisins in our cupboard or pantry. You could make this dessert without having to buy anything special. I love recipes that are like that. We need to use more of these older recipes. We could learn a lot from the frugal ways of earlier generations.

This recipe is also pretty healthy for a dessert. The crust is the most unhealthy part of it.

Give this recipe a try, you might be surprised at how good it is.

« Taking Lunch To The Office
The Best Centerpiece »